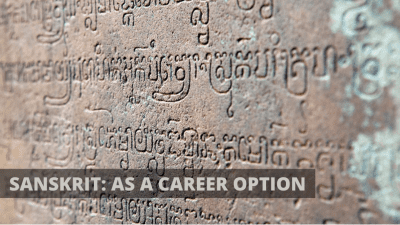 Sanskrit As A Career Option

The fact that Sanskrit is one of the oldest languages in the world is not hidden. With a history of more than 5000 years, Sanskrit is known to have its roots in India. Sanskrit is only loved in the middle east but also has its fever throughout the globe. Not long ago, the news made the headline, as 14 universities in Germany were facing issues to meet demand as students clamour for courses. With this, it is crystal clear that Sanskrit is not only loved in India but also worldwide.

However, even after being loved, there are not many people who learn Sanskrit these days. If we talk about India, the 2011 census made the record of languages spoken in India, and Sanskrit had the minimum number of speakers.

There are various reasons for this. People find it difficult to learn Sanskrit, many struggle to find the way how to learn Sanskrit and from where, and others don’t even know much about its future scope.

Considering all this, we have brought you several different career paths which you can opt for in Sanskrit. We will also cover a way that will guide you on how to learn Sanskrit easily.

Before jumping into what jobs you can opt for in Sanskrit. Let’s firstly look at the course you can study.

Below are the courses you can go for:

Here are some of the universities and colleges that offer these Sanskrit courses:

Despite the fact that Sanskrit is practically an extinct language, the roots and appeal of Sanskrit are still in great shape.

Sanskrit graduates can have a brilliant career and below are a few career options for them:

Interpreters & Translators are the ones who play a huge role when it comes to dubbing/translating anything from one language to another. They play a huge role as they may make an interpretation of books and articles to reach out to more potential readers. For a person who is familiar with both English and Sanskrit, they could meet all requirements for a task as a mediator, as well as interpreter. Since very few individuals actually speak and learn Sanskrit today, they may wind up deciphering materials more regularly than deciphering. To become one of these experts, you for the most part need a degree or a diploma in Sanskrit. In addition to this, be familiar with English, Sanskrit and other languages.

Technical writers have a great scope and no matter in which field one is working, they’ll need writers to promote their work online. Since a portion of the total population speaks Sanskrit, technical content writers who can write in Sanskrit might be expected to create the documents. To turn into a technical writer, you'll need some degree or diploma in a field like mass communication or news coverage, however other degrees could work as well if you have the knowledge of Sanskrit basics. You can learn Sanskrit basics online easily.

It’s nonetheless to say that even if the demand in law there are still people in the world who wish to learn Sanskrit. The good thing is Sanskrit is not only taught in the primary or secondary classes but in high school, colleges and universities as well, so one can easily apply for a teacher or a lecturer if they hold a master’s degree in Sanskrit.

Customer service representatives (CSR) are used by corporations and businesses and are liable for handling calls from clients, preparing orders, and addressing & assisting clients with their queries. They may assist a client in tackling an issue or handle a complaint. A few clients may speak Sanskrit, which implies agents ready to speak Sanskrit would be very useful for specific organizations. To turn into a CSR, you commonly just need a secondary school confirmation and complete on-the-job training and of course, you should have knowledge about Sanskrit basics.

This is another amazing career opportunity for Sanskrit graduates. Anthropologists are keen on studying various cultures, languages, and social classes around the globe. They may investigate various antiques and documents to achieve a far better understanding of the past. For an anthropologist working in a region of the world that talks or learns Sanskrit, knowing about the language would be useful in their investigation cycle. They may uncover old manuscripts or ancient rarities that contain Sanskrit that they would have to comprehend. For this profession, one needs a master's degree or a PhD degree in anthropology.

In the end, everything comes down to your Sanskrit knowledge. Many people have one query and that is “how to learn Sanskrit?”. Though it’s true that it could be a bit difficult to learn Sanskrit due to its complexity however it’s nonetheless to say that that’s what makes Sanskrit more interesting to learn. One can learn Sanskrit easily online, with online Sanskrit classes and courses.